We build the technology and apply our methodologies to accelerate your growth. We provide the support and an experienced team you can rely on. Your dream of taking your business to the next level will become, a reality.

LET'S GET IN TOUCH

Our Methodologies Will Transform Your Business

The most difficult part of owning a membership website is growing your members while keeping up your profit margins.

Client Engagement Academy is built on a foundation of transformational methodologies, each work together to maximize your business’s ability to scale. These “activators” are based on years of real world research, testing, and implementation.

The unfortunate reality of our industry is that there are a lot of coaches out there selling you training, based on theory… not experience.

It’s not enough to just give you a WordPress package and some marketing strategy. You need the entire system to work in complete congruence… and there are pitfalls you can’t see until you’ve built a site (or many sites, like we have).

How Do We Help You Scale?

You’ll get advice beyond technology. By focusing 75% on strategy and 25% on technology, we make sure that you have the resources to produce student outcomes. Client Engagement Academy clients get help with:

Pricing – We help maximize course offerings and pricing so students are invested in their transformation and are incentivized to continue.

Positioning – We help clients position their business as the expert in their industry, making them competition-proof in a rapidly expanding digital market.

Content Customization & Planning – When it comes to delivering outstanding online learning experiences, content is a big part of it. We help our clients plan, produce and structure content effectively.

Team – We have built a qualified team than can handle all your project’s requirements. From curriculum development, to design and programming.

Supporting Clients for the Long Term through our hosting program – We keep client’s sites up-to-date and running as smoothly as possible. And when tweaks or improvements are required, we’re only a phone call away.

We’re a culture of doers who can’t live with the status quo. In fact, we get frustrated whengood people purchase online courses, and the majority don’t graduate. We are happiest when we’re innovating and providing easier, smarter and more engaging ways for students to excel.

We consider ourselves expert digital experience enhancers – we will build your online education platform designed to fit your business needs and goals. 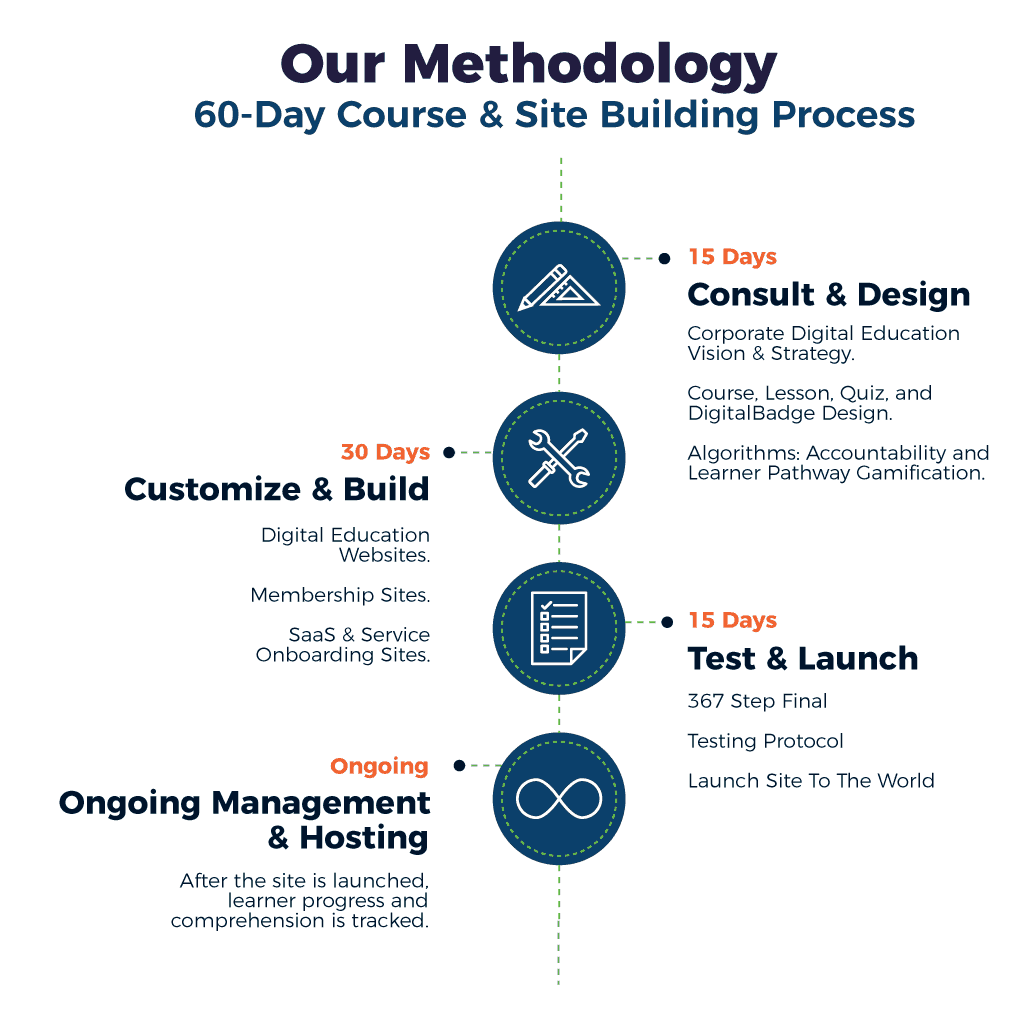 HEAR IT FROM OUR RAVING FANS

There’s No Limit to What We can Make Happen Together!

No two clients are the same. We help our clients identify their needs and customize a solution based on our proven course creation foundation. It’s the same system we’ve used to create millions of dollars for Ryan Deiss, Jon Benson, Brian Tracy, Jason Hornung, John Assaraf, and more.

We love working with consultants and entrepreneurs who are obsessed with student results and ready to reach seven, eight, even nine figures with their business creating online courses and membership sites.

If you are ready to make leaps in client engagement and expanding your business then it’s time to contact us!

Mike Weiss spent more than 30 years in Financial Services having raised more than $100,000,000 and served as a Financial Consultant to thousands of Clients. Additionally, Mike Co-founded (and later sold) GreenTrack, a leading financial and tax reporting company that was responsible for tracking more than $26 Billion in assets. From Finances to Digital, Mike transitioned to a career in Digital Marketing and, Co-founded (and later was bought out) NeuroGym. In less than 16 months, the company went from $100,000 per year to more than $2,000,000 acquiring over 7,000 customers in 80 countries. In 2012, Mike was chosen top four (out of four-hundred) for Infusionsoft’s, “Marketer of the Year.”

Mike recognized early on in the financial industry that customer education and results were the keys to success. Then, after his move to Digital Marketing, this became his, “Mantra.” In the years that followed, Mike Weiss has become recognized as one of the, “Top Guns” in Digital Education and Technology with a specialization in client engagement, e-learning, online marketing and sales, digital badging and gamification.

Mike formed Client Engagement Academy which has designed, built and manages more than 30 “Cutting Edge” EdTech Platforms for many of the Digital Marketing Leaders in the industry. When he’s not, “Breaking New Digital Ground,” Mike spends time with his soulmate, Carolyne, and their family. They have a powerful spiritual practice and work toward helping others to treat all relationships with humanity and dignity.